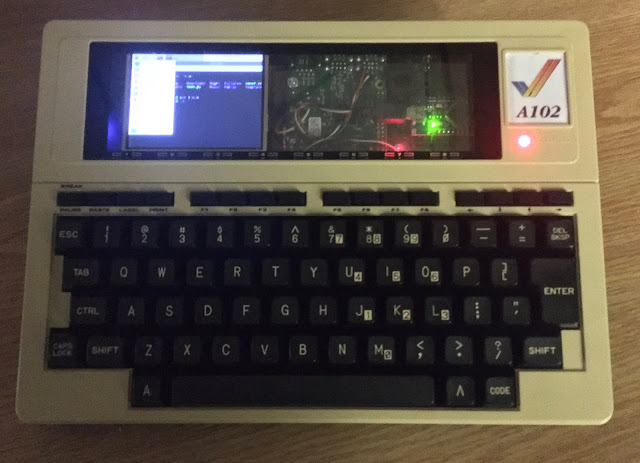 The short version is that I was super productive on these projects this past month.  I didn't complete it, but I never realistically thought I would be able to.  I lost a week's worth of time, or so, prepping our yearly Halloween Hack (blog post soon)... not to mention losing some time to work on building my Lego Saab 900... (blog post soon too).
One thing I will say, is that by combining the projects together, I tricked my brain into quite effectively "being okay with" working on one project or another, by them all being part of the same project.  So I would say that the month was quite successful.


So Anyway, I'm going to first go through a bunch of goals for the month, for the RC challenge, and in general, and briefly discuss my progress on them at a meta-level.  Then I'll get more into details about the actual work.

I wanted to get the Pi 3 configured and booting right into an emulated  Amiga/Amibian environment.  I got the pi configured with standard raspian instead of Amibian, since I wanted this to be more of a general use machine.  It'd be nice to be able to use it for firmware development of the LL530 as well as the machine that it's targeted for.

So the target changed on this, but it is complete for now. 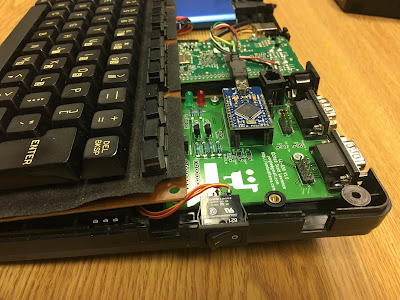 I wanted to have the LL530 (USB Interface to Amiga serial keyboards, Amiga/Atari controllers and mice) fully finished.  Although I did not finish the firmware this month, I got more done on the project this month than I had in the past 6 months.  However, I was able to test the DIN pinout to discover that it's backwards, so I need to rev the board for those...

I didn't fully succeed, but I was successful.... if that makes any sense.

I wanted to have an RC2014 Z80 computer built in as well, that I can connect to via serial port, for doing RC dev work without an emulator.  This aspect sadly got the least amount of attention.  I have an RC2014 mini installed, connected to the serial port on the Pi 3.  I've rewired the connection twice now, and I still cannot get it to connect using this wiring. 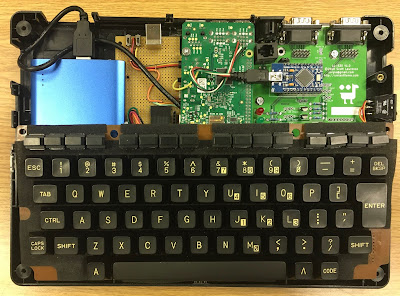 Most of the effort this past month was in this area.  I wanted to have the entire thing as a finished unit; to be able to be brought to a coffee shop, pull it out, turn it on and use it wirelessly. I can do all of these things right now with it.

So I would say this aspect was completely successful... although It does need improvements, particularly with the screen.

I started with a base Raspian image from their site.  I had the Pi hooked up to a HDMI monitor with USB keyboard and mouse.  After using Balena Etcher to get the image onto an SD card, I booted the  machine up.  I went through the basic setup, and updates.

I launched raspi-config from a terminal window, and went through to  enable ssh, i2c, and serial.

Next I installed some useful software packages:

I made sure that serial was enabled  in /boot/config.txt,

I use screen as my quick and dirty way to connect to the RC2014 which is wired up to the uart on the raspi per the diagram above.  The reset line is wired to GPIO 4, so i use this shell script to "hit the reset button":

The Red and Green LEDs are wired to GPIO18 and GPIO12, and I can run this script to do a nice fadey display on them:

I may rewire these, or wire up additional LEDs to the ones specified with the Amibian/UAE led indicators, which are defined as GPIO4 for activity, GPIO16 for "Power", and GPIO16 for a clean shutdown button. 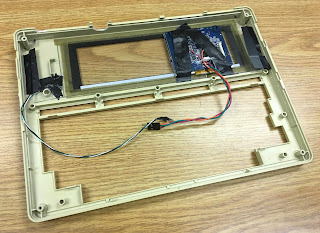 I had to hack the power input so that it would run off of 5v.  These are made to be used in cars, so they expect 12v of power.  At the time I did this, there were examples of doing this modification on
other displays, but not this model.  I powered it up using 12v, then probed the outputs in the power supply section for a 5v rail... and I soldered a 5V input there.

Once I had done this, I connected it to the 5v power in the enclosure, and hooked up the video input from the composite output on the Pi 3.

One snag I hit though, is that it wouldn't work right, It would flash on when the Pi booted, but it wouldn't show the desktop. Testing the Pi with HDMI or a known working composite input worked just fine though. 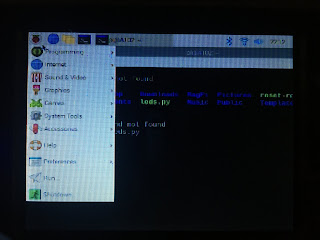 I was trying all sorts of things, and eventually decided upon trying PAL  video modes instead of NTSC, and that worked.  I spent some time tweaking the overscan settings as well, to stretch the screen to fit.  I also noticed that the contrast viewing range was substantially better on the top side of the display, so I ended up mounting it in the enclosure upside down, and I flip the video in the pi's config too.

So the changes that all this amounts to for /boot/config.txt are:

Although, as you can see from the screenshot above, it's basically unreadable.  So I was able to get it to work, but any future development on this will need to be with a different display.  Something with at least 480 rows, so that Amiga emulation can be reasonable on it.

Combining it all, and the Future... 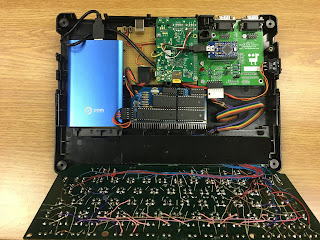 I spent a few evenings rewiring that keyboard which mostly works really well.  I'm using a 5000mAh battery and get an undetermined-but-better-than-my-old-iBook amount of time with it.

The display is garbage.  I'm currently looking into replacing it with an HDMI-based 4" Waveshare IPS display with an 800x480 resolution for about $40.  Surely that will require moving around hardware inside of this enclosure, and since the display is meant to piggyback on the Pi, I will lose my integration board.

Obviously, I'll need to install the Amiga emulator, Tandy 102 emulator, my Model-T-Shell, and the Arduino IDE so that I can continue development on the LL530

In short, I'm super happy with where things are now, it just needs some tweaks to get it to be usable as a primary system. :D

Posted by Scott Lawrence at 4:02 PM