One of the functions of this KIM-Uno project involves functionality similar to the stock KIM monitor.  You press buttons 0-9, A-F to enter a number (a nibble, a half byte), and it scrolls in from the right side of the display.  Usually you can only enter the address bytes (first 4 digits) or the data byte (rightmost 2 digits).  I wanted to use all 6 digits for the values entered so I needed to write my own handler for this. I decided to kinda glance at the KIM Monitor code, but I wanted to make it all on my own. 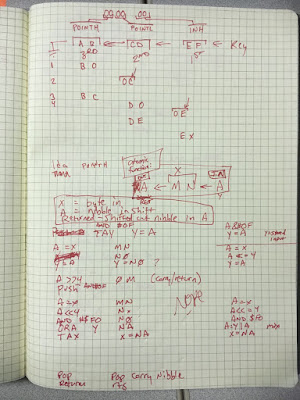 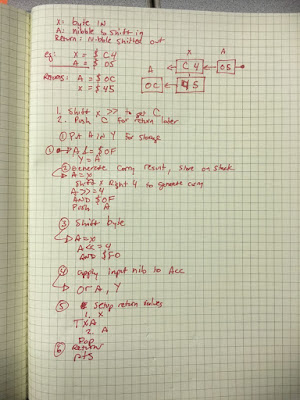 Both of the above (which didn't quite work) were basically the same as the working version (v3) which I did implement and had in the code for a week or so.  It was 46 bytes long, plus a sub function which got called 3 times that was 20 bytes long.  Not very small.  The basic procedure was this:

That's basically it. Nothing particularly wrong with it, it works fine, but once you understand more of the opcodes available in the system, we can drastically reduce this.

I was working on implenenting one of the calculator functions "Shift left one bit" when I learned/remembered about shifting with ROL (rotate left) and ROR (rotate right) which shift the bits around, storing the one going out and the one going in using the "carry" flags bit.  The implementation of this function was super easy using this:


Then it hit me, I could leverage off of this carry bit for the above process, since it basically is:


This change of shifting everything by one bit four times, rather than the above where I was shifting four bits three times, worked out perfectly with the available opcodes.  Here's the final code for this routine:  (INH is the third digit pair, POINTL and POINTH are the second and first digit pairs of the display respectively)

We set up a loop using "x" as the counter register, notice we set it to '4' first.  We are also doing something that I just learned about which is non-named labels, which is why you see ":" starting a line, then a "bne :-"  (branch (goto) if not equal to the previous non-named label.)
Which works out substantially smaller.  It has one chunk of 13 bytes that gets run four times, for the entire code block of 27 bytes.  Quite a lot less!  I'm really enjoying learning 6502 asm for this!

The code for this project can be found on github at The LlamaCalc directory of my Projects5502 repository.  This requires the cc65 toolset to build.