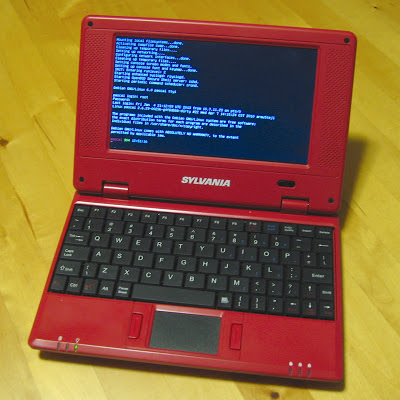 I recently picked up the Sylvania SYNET07 ARM-based 7" netbook from DailySteals for $40.  This is the same netbook that CVS as well as other convenience stores sell for $70-$100.  It came with Windows CE, although it is available with Android as well.  I figured that for $40, I could throw Linux on it, and use it as a portable, pocket sized hack laptop. Some people seemed to have some success getting Linux on it.  I can't afford a MacBook Air right now, so this will have to do for uberportable hackbox.  I ordered the red one, because why not.

I first decided to try out the latest Windows CE and Android on it before sticking with Linux. Windows CE booted super fast, but it was mostly unusable.  IE was sluggish, YouTube app didn't work at all. Android took longer to boot, and seemed to work ok, but the marketplace was empty for it, so no additional apps could be added, which made it kinda useless.

Next, it was Linux time!  Most of this follows this procedure, but with some additional changes.

The first thing to be done was to prep the SD card.  I had spun up a Linux box recently, so I'll be using that to prep the SD card.  I plugged it in and noticed from dmesg that it showed up as /dev/sdb.  I used "fdisk" to create two partitions on the card.  First is a 250 meg FAT-16 partition, then a 7.5 gig (? whatever filled the rest of the card) Linux/EXT3 partition.  I then formatted the partitions:

Then mounted them in /mnt:

I had downloaded the two files provided at the above link, which I've mirrored here:  [fatpart.tgz] [extpart.tgz]  I then extracted these to the newly formatted SD card:

The card is now bootable in the Sylvania netbook.  I like to make a few tweaks from here though; namely changing the hostname, and prepping the pacakge system to actually work as expected.

Next, put the SD card into the netbook, and press the power button to turn it on.  It will boot to a linux prompt.  Log in as root, no password.  Plug the netbook into a network connection, then type "dhclient" to get an ip address.

The first thing we need to do is to update the old package database on the thing.

Now, it's time to install some packages.  Here's the commands to install the developer packages I like:

Next, it's time for some X11 goodness

Past this, I like to install the window manager "wmx", building it from source

You should be able to start up X11 - "startx" and it should bring you into twm.  You can edit ~/.xsession to something like: 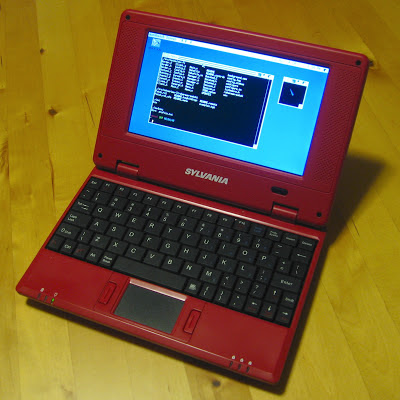 There's something about the way it accesses the hwclock (hardware clock) on shutdown that crashes the machine.  We'll flat-out disable it here so that we get clean shutdowns.  This isn't elegant, but it works.

and replace their contents with:

Now, let's do the same to the command at /sbin/hwclock

This may mean however that we will need to enter the date each time we login, like so:

Now, we should get the timezone stuff setup properly. Add this stuff to your .profile or .bashrc:

Some commands may expect these, which you can probably ignore:

And now install locales and ntpdate

Do not install 'ntp' or locales ('locales-all'), as they may scrog the hwclock and dhcp client/ethernet hardware again.  (...Well, not particularly the dhcp stuff, but it makes the system forget that eth0 is broadcast capable somehow.  There's a fix for that by specifying eth0 on the 'dhclient' call, as seen in the following.)

If time gets out of sync, as well as after you login, you can just use:

Add this in to your .profile to get a handy routine to change the system's screen backlight.  The values range from 0 through 255.  It seems that anything less than 90 is essentially off.  above 192, the intensity increase is minimal.  The default is 128.  I run it at 98 in very dark rooms.

So now, you can just type "backlight-lo" or "backlight-hi" in any shell, and it'll adjust your screen's backlight.

While you could do rsync from the laptop to another host, I've found that the easiest way to back up the system is to shut it down cleanly, pop the SD card, shove it into another machine and just tar the entire EXT3 partition to a file to be kept for safe keeping.  I only use about a gig of space on the card, so this takes up very little space on a desktop machine.  I also keep a directory of stuff that doesn't get backed up, "/NOBACKUP".

Plug the card into a host, I use an ubuntu machine.  CD to the root of the mounted SD card, and tar it to a file in your home directory (or wherever, adapt the line for your own use)

To restore, simply follow the first step above, where you just untar your new backup, rather than "extpart.tgz".  My backups are around 990 meg with all of the above installed.  gzip of that cuts it about in half to 450 meg, which is great for archival.

I've found that some packages seem to totally scrog the NIC for no reason.  For example, as mentioned above, "ntp" causes bad things to happen, as well as "xscreensaver".  I'm not entirely sure why this is, they don't seem to touch anything that should touch the network, but apparently they do.  Backup often.  Get used to restoring. ;) 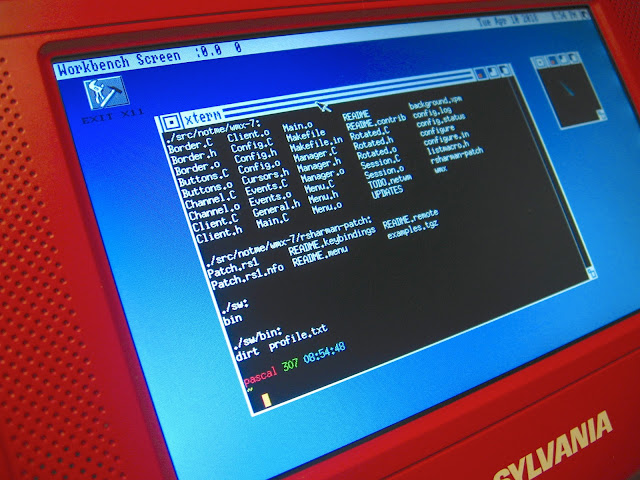 Posted by Scott Lawrence at 8:22 PM