As part of the Animatronic Avian project, I need to have a way for the controller software/computer to send synchronized data out through all of the performers on the stage.  Being that I may be using my reflashed stepper motor controllers in this, rather than full-blown Arduino boards (or custom ATmega boards), I need to have a way to network these without using any precious IO pins.

On top of this, it needs to be very lightweight so that I can send data down through all of the performers without using too many resources of the device.

I also want it to be cheap, both with cost of parts for implementation, as well as for system resources in the chip firmware.


The solution I came up with is to use the builtin UART, which usually is set for a standard RS232 connection, but in a cascading daisy chain fashion.  This means that the hardware-assisted UART in each chip, plus one data line down to the next chip is all that's needed to implement this.  The networking stack running on the device is light enough that it should not impact performance of the main usage of the Arduino. 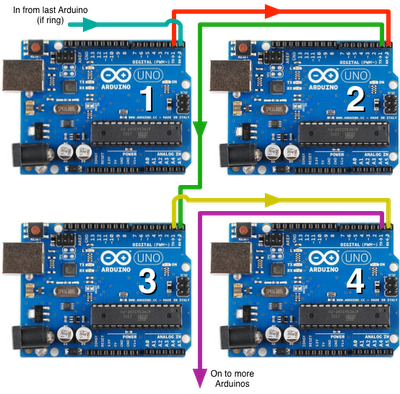 The above diagram shows how four Arduino boards are wired for this.  Basically instead of the TX and RX of a board connected to its host, instead its TX goes to the next device in the chain, and the RX comes from the previous device on the chain.   The actual implementation of this uses my D15-based ATmega widgets, and thus I followed this diagram: 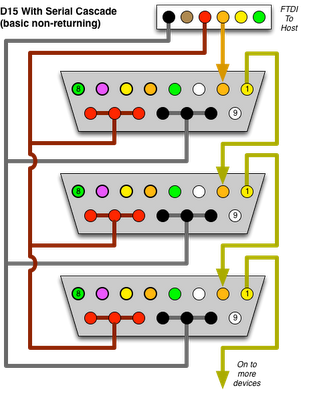 Four wires are needed to hook up each node: power, ground, serial in, serial out.  In the above configuration, the final node does not output to anything.  I had the above working quite well with a simple firmware program.

Before I constructed this, I had no idea if it would even work.  But I spun up five of these, networked together, and it all seems to work perfectly.  Here's a video where I demonstrate it:

The program reads in a character from serial input, if it's a "b", it sends the "b" to the next device immediately, then turns off the LED for 1/4 second.  If it is a number, it will turn off the LED for that many seconds, then subtracts one from that number and sends that new number down to the next node.

So if it got a "6", it will turn off its LED for 6 seconds, then sends a "5" to the next one.  This was the simplest program I could think of to check if this concept would even work.  Turns out, it does! 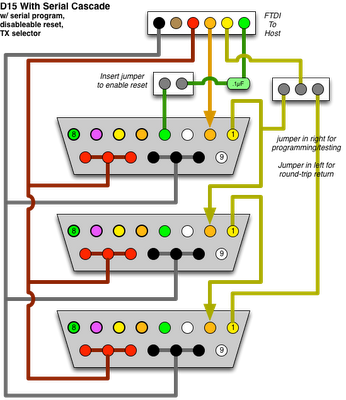 This diagram shows an updated version which adds a few features which will be helpful for getting the software design debugged.   The reset line is connected to the FTDI header, as well as a jumper to feed the output of the first device or the last device back to the host.  This will enable me to reprogram the first node quickly, without needing to plug the micro into an FTDI interface cable.  This also will let me experiment with adding a "return".  The "return" line takes the output of the final node in the daisy chain, and sends it back to the host.  I may use this as a trigger for a mechanism to continuously send data states to all nodes.  (Once the computer host receives something from the final node, it can send down the next data envelope.)


So the basic idea of how this will be used is as follows.

The host will be playing back an audio track, and looking at a few data tracks.  At any particular timeslice, it will prepare a data envelope of bytes, containing all of the synchronization events for the animatronics.  This includes digital bits to turn LEDs, motors, and solenoids on and off.  There are also analog bytes that will be for controlling servos.  Let's try out a use case to better understand how this will work in practice...

First, the host looks at the data for the current timeslice.  For our example, we will have three animatronic objects on the serial bus, each of which has 5 data bytes associated with it.  The data is prepared and would look something like this:


The first number is the count of the numbers that follows.  In this case, 15 digits will be included.  This is sent out from the computer host via RS232, 9600 baud.  The first animatronic microcontroller receives this, and will remove the numbers that it needs from the end.  In this case, it will pull off the five "30"s from the end.  It will also reduce the count from 15 to 10.  This will look like this:


It now sends this modified data envelope to the next device on the bus.  That device will pull off the  five "200"s from the end, and then send down the new envelope.


The final micro on the list will pull off the five "1"s, the count reduces to 0, and it refrains from sending anything further.

The specifics of the protocol are yet to be worked out.

Also, the specifics of the interconnect are yet to be worked out too.  It'll probably be four pin header for input, four pin socket for output. (+5v, Ground, data, return)

The latency of this will be imperceptible for the use cases I plan to use this for, and it will enable me to have oodles of devices on the serial bus, all controlled by one host computer.  And best of all, no additional hardware (MIDI, DMX, I2C, SPI) is required, and no additional IO pins will be used for it.

Here's the Arduino program if you want to try it out yourself and you have a couple of Arduinos lying around...