I like to collect old pocket computers and gadgets. One of the things I encounter often is exploded batteries.  I recently rescued a Canon Powershot A520, and it seemed to be completely dead, probably due to poor battery contact due to the previous batteries exploding. 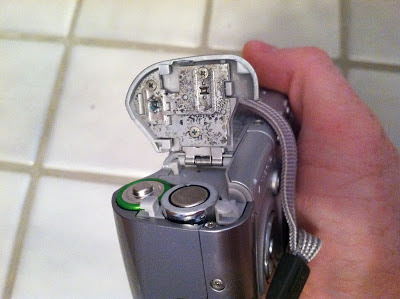 I've read stories of other people using watered down vinegar to remove the alkaline, but I instead use just vinegar.  I dip a paper towel in it, and saturate the affected areas.  If you listen closely, you can hear it fizzing.  Ssszszszsszszszs!

After a few saturations and wipes with paper toweling, I had removed most of the alkaline gunk.  From here you can clean it with a baking soda paste, but for this, I just decided to scrape the contacts a bit. 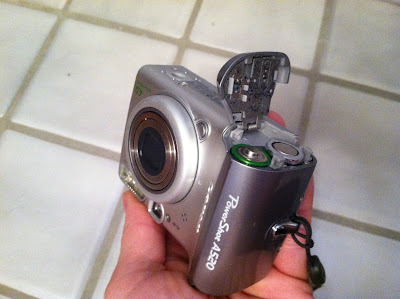 Once it was cleaned up, I put in some old AA batteries and it powered right up!  I dropped in my old 2 gig EyeFi Geo card ($20 from Woot many moons ago), and it worked!  I recharged some high capacity AAs overnight and dropped them in.  Then things started going badly...

It would power on, then immediately turn off.  I tried my second set of rechargables, and the same thing happened.  I re-cleaned the contacts, but that didn't seem to help.  It was at this point that I thought I knew why it had been dropped in the recycle pile.

Then I realized that my AA rechargables put out 1.2v each, rather than the 1.5v of alkalines.  The camera has a requirement printed on it of 3.15 volts.  1.2 plus 1.2 does not equal 3.15.... I found a fresh pair of alkalines and dropped them in, and sure enough, it works perfectly! 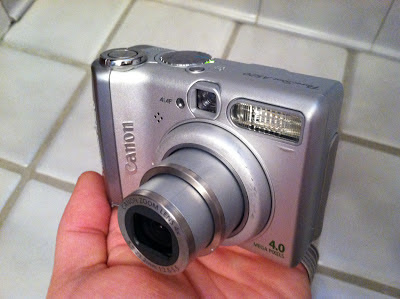 As a sidenote, I also set up my computer at home to host the EyeFi software, and it drops the downloaded pictures into a Dropbox directory.  Now, all of the pictures taken with the camera are instantly shared when I'm home. I have no reason to manually sync the card physically now. Yay!
Posted by Scott Lawrence at 10:48 AM