One of the fun things about owning retro computers is that you get to repair them yourself. (Perhaps this isn't a fun thing for some of you, but I really enjoy it.)

About 6 years ago, my Amiga 1000 started showing some strange behaviors but only in the green levels of the video.  If you dragged the green slider, instead of it stepping up gradually from dark to bright, it would get brighter, darker, brighter, darker, much brighter, a little darker than that, and so on. The following video shows this...


About 5 years ago, I had opened it up and replaced two '244 latches in the video output section.  I kinda did this blindly by looking at the schematic...

...and replacing the two latches, assuming that one of them had gone bad.  After doing the repair, the problem persisted and I just gave up on it for a while.

A few days ago, a comment on the above video re-sparked interest in this project and I decided to bring the Amiga over to Interlock and really get to the bottom of the problem. I hooked it up to a scope and followed the paths according to the schematics.

I traced the lines from input on Q2 (where all of the four resistors in the D-to-A resistor ladder are joined, and back through to the latch, and then continuing back to the Denise video generation coprocessor. 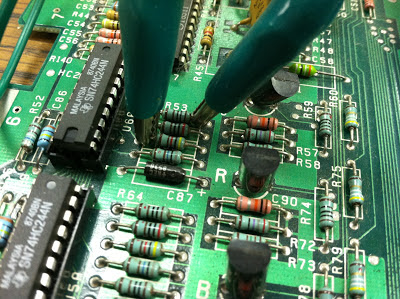 I tried jumpering across various portions of the resistor ladder to try to track down exactly where the issue was.  It gave some pretty interesting results, but really only helped me track down where the issue is.  I eventually came to the realization that something on the R55 data path was drawing it down to ground, or at least close to ground. (Where the left alligator clip is attached in the above picture.)

I tried pulling out the pins on the Denise's G1 output (pin 29) and soldering it directly to pin 15 of U6A, and it didn't change anything.  I then pretty much realized that the issue was on the other side of U6A -- the connection between pin 5 of U6A and the left side of R55 (4k resistor).  I decided to leave the above wire "flying" and pulled the resistor leg, soldering it directly to pin 5 of U6A. 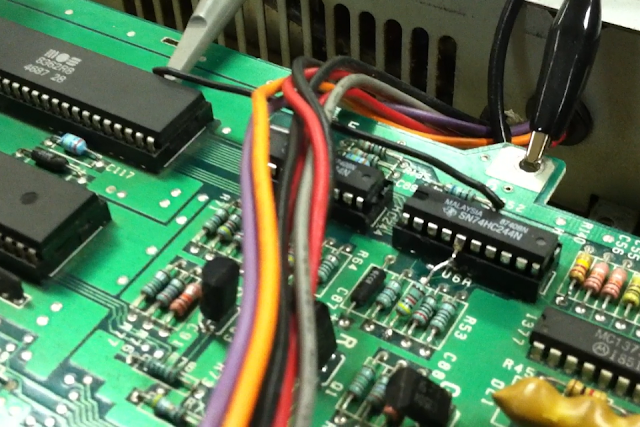 This did the trick!  It worked.  I probably could have restored the flying wire back to the original traces on the board, desoldering the wire, re-seating the chips, but I had flexed those pins in and out a lot, and decided to not stress out the pins anymore, and just leave it.  -- "It works... don't touch it!"

After 5 years of it sitting on a shelf, my trusty 'ol Amiga, my favorite computer, is finally is working again!