Welcome! If you're here you either from using the QR code I had at Maker Faire, follow me as @yorgle on twitter, or perhaps from my YouTube channel ... regardless... welcome!  This is my project blog thing and I post info about all of the esoteric and weird things I work on here.

This post is meant to provide more information to you about all of the projects involved.  Follow this blog for more updates about these projects; links to videos, source code, etc. 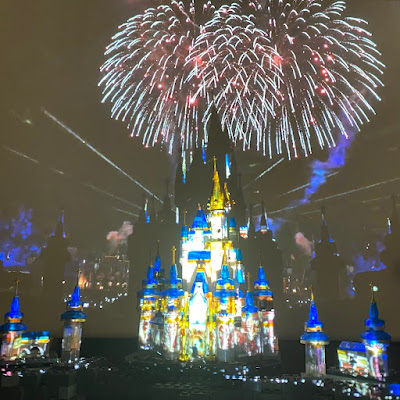 For this, I got inspiration from this video on YouTube where they played this video of the Happily Ever After fireworks show at Walt Disney World onto a Lego model of "The Disney Castle".  It came out awesome, and I wanted to do something similar.

While I'd love to have that Lego set, I don't have any place to put it, and on top of that, I don't have $350 to spend on it... however, Lego released the much more budget-friendly Mini Disney Castle which sells for $35 and still has some excellent details and even comes with a Mickey minifig!  I used this as my starting point.

I dug out my Dell short-throw 1080p DLP projector, and projected it onto the castle.  It didn't match up perfectly, which I had expected.  I bought a second Lego Mini Disney Castle for parts, and made a bunch of modifications to the model to add a few small spires, adjust heights and proportions.

Then I built a base using some gray rocks made out of Lego, to line it up perfectly with the projector.

For MakerFaire, I also made a projection screen to set up behind it.  For this I used some 1/2" PVC pipe and fittings, and made space for a roughly 2x3 foot screen.  For the screen itself, I used about a yard light-blocking fabric from Joann Fabrics for about $8.  The fabric I picked out was tan, with a white backing. I'm using the white backing side for the screen.  The main criteria I was looking for in a fabric was something with as little surface texture and depth as possible. I think this material choice was a great find! 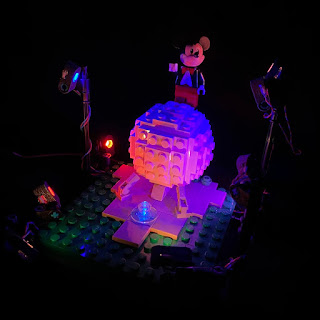 I've loved the idea of using small vignettes to display my favorite minifigs, and I was super happy to find instructions from @benbuildslego to build a super tiny Cinderella Castle, long before the "Mini Disney Castle" was released. I highly recommend his instructions.  And I have no plans to make a tiny projection mapped version onto this model. Lol.  Anyway, one of the other instructions of his that I ordered included my favorite geodesic sphere in the world... Spaceship Earth from EPCOT.  (aka "that big golf ball thing").
I thought it would be great to light it up just like the real thing, so that's what I did.
I built up his design, but I added some supports around the edge for some Technic pieces to support some lights.  I also 3D printed some Technic-compatible holders that I used to mount some of these tiny NeoPixels into.  I designed the element so that the lights can be adjusted and pointed exactly where I wanted them to go.
The NeoPixels are wired together using some kynar/wire wrap wire so that I could be sure it could be routed well, and not be too obvious.  All of this is wired back to an Arduino to control it all.  Any model of Arduino (Uno, Leonardo,  Mega, etc) would work, but I used a "SS Micro" as I had an extra one and I love the formfactor of it.
The code, soon to be available in Github, consists of a set series of "scenes", which the 10 Neo Pixels can display.  The scenes can be faded between, randomized in intensity so that they've got some life to them, and randomized in duration and sequence.  The code demonstrated just cycles through the four animated scenes forever.
The scenes are:
There's also two special lights; one for the obelisk/fountain in front of the sphere, and one for a spotlight on the Mickey minifig atop the sphere. These operate externally to the animation sequences described above.
Posted by Scott Lawrence at 11:40 PM