For this Summer's Retro Challenge (2015/7), I worked on a small widget that lets you use an Amiga mouse, Atari ST mouse or Atari-style Joystick.  I was successful in building it and having it be manually configurable.  There's a shell based interface that you can use to select which input device and output style is used.

All of the code for this project as well as further and future documentation is available at the project's github repository.

There are a bunch of things that I did complete during the "challenge"...


There are two features that I did not complete before the end of the month...

First of all, I was unable to get the keyboard support working before the end of the month. I was having a hard time with it only to realize it was a power issue.  The keyboard was consuming more power than my widget could provide.  It will require a secondary power supply to give enough oomph to get it working.  I also was unable to read from it once I hacked in some power.

Secondly, I had designed an algorithm to autodetect between the three different supported input devices, but I was not able to integrate the code in before the end of the month.  At some point I'll mix it in, and it will switch the kind of device it will be based on analysis of the signals (and signal pairs) of data coming in when it detects "motion".

At this point, I'd like to take the codebase as it exists now, and change the program flow to do the auto-detection of the device type, and then do the "appropriate" thing with it.  "out of the box" it will just "do the right thing" when devices are plugged in. Namely:

I will implement this at some point, perhaps during the next Retro Challenge.

Posted by Scott Lawrence at 9:14 PM No comments: 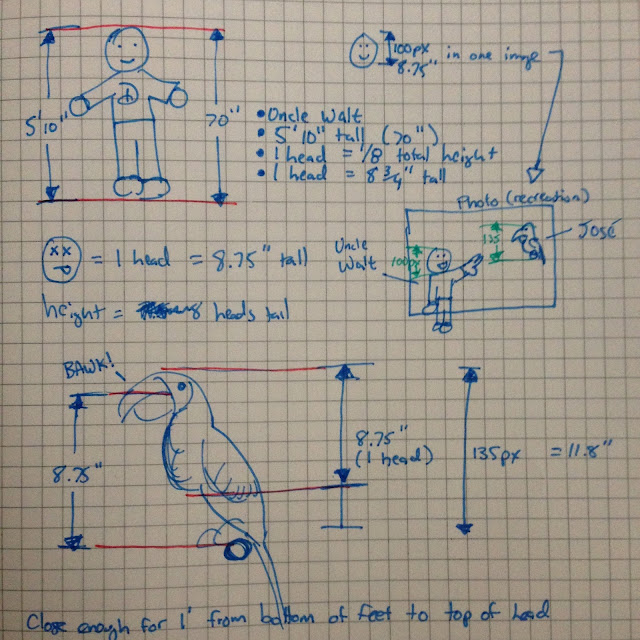 Now that I have the proportions, and the sizing for this documented, I can proceed to learning how to use the laser cutter at Interlock and design an internal structure a la boat ribs and stringers.  I made a boat using this technique back in high school out of balsa wood and MonoKote that worked out well. This time, i'll use some 1/8" wood of some kind instead.  I also plan on doing 3d printing for the beak, at least for a form to use for vacuum forming, or perhaps as-is.  I haven't figure that all out yet.
Posted by Scott Lawrence at 2:02 PM No comments: