One of the tools I will need for my Animatronic Avian project is a vacuum forming tool.  To be honest, I've wanted one since I read an article on the web about how to make your own Stormtrooper costume in the late 1990s.  It now seemed like a good time to make one, as I'd like to use it for producing the bird parts, and it seems pretty straightforward, so within a week, I was at Interlock, crafting up a vacuum plate.

The basic design I'm going with for the vacuum plate/box is a small box, with a shopvac connector on the bottom, pegboard as the top, screwed together, and metal foil taped to seal air gaps.  This is sort of a mixture of a few different designs I've found on the net.  The material will go on its own frame, heated by a heat gun, then pushed down onto the vacuum frame, with the shop vac turned on.  The softened material will get sucked in tight against the mold, forming it into that shape. 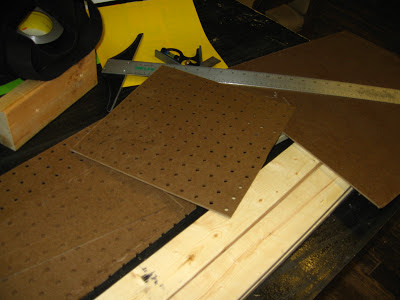 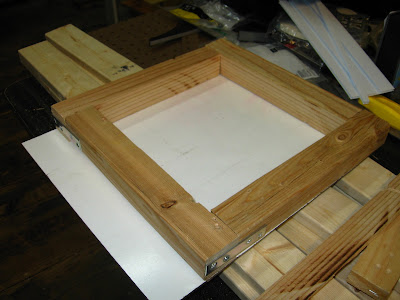 For the frame of the base, I ripped some 2x4 pieces into 2x2 ish stock.  To make this easier to assemble, I made four of these, cut to 10 1/2" long, and arranged them so that they butt up against the others, as seen in the picture above.  They went together fairly cleanly, but there were some air gaps, but this isn't important as the foil tape will seal it up later.  I specifically wasn't concerned about tolerances on this as I knew the tape would cover it anyway.  The stock is held together using metal brackets, also seen in the above picture. 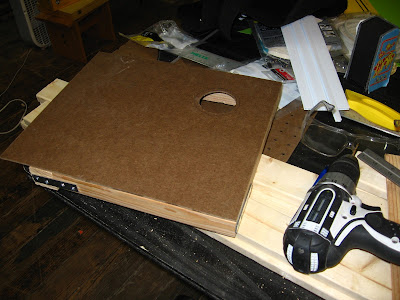 The baseplate got a 2 1/2" diameter hole in it to accept the shop vac hose.  I would have used a hole cutter to do this, but I didn't have one.  Instead, I drilled a pilot hole and used a scroll saw to cut out the hole. 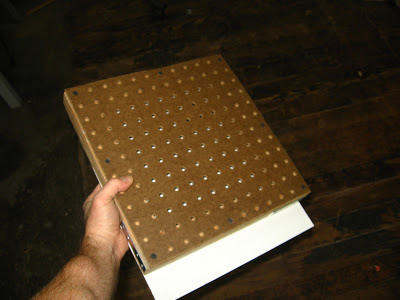 The frame is then screwed to the baseplate (pre-drilling all holes, of course) and to the pegboard using drywall screws, AKA the "duct tape of screws". 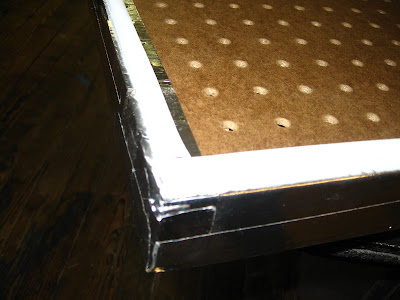 Next comes the foil tape to seal it up. Finally some door weather stripping to act as a good seal with the material frame. 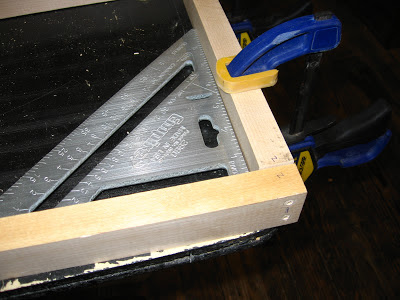 The material frame was made with some 1x2 stock or whatever this was, from the scrap pile.  It was simply drilled and screwed together with more... drywall screws! 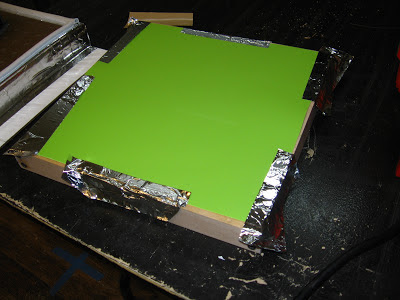 The material is taped to the frame (for now... in the future, I'll build a better, less cumbersome way to secure the material.) 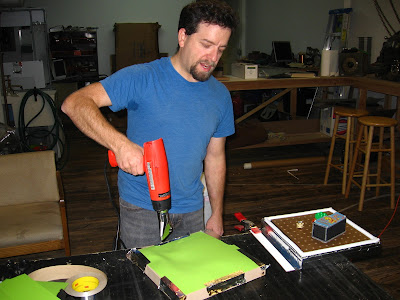 Then I heated it with a heat gun. 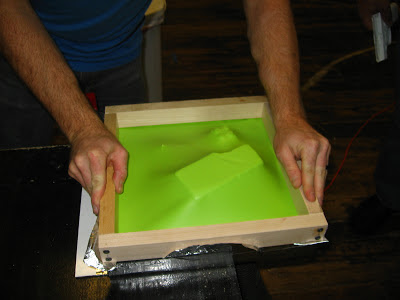 When it was time, the shop vac went on, and I lowered the framed material down onto the plate.

Not great.  It was ridiculously difficult to get the material heated consistently and hot enough.  The heat gun would burn a hole through the material if left in one place, but the material cooled off too quickly if you moved away from it for too long.  I need to build a heater rig to prepare the material. 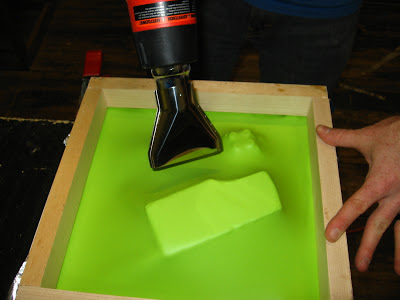 I attempted to re-heat the material with hopes of getting it hot enough to pull in, while the vacuum was on.  It helped a little, but was quite tricky to work with.  I then removed the foamcore miniature arcade machine, and continued, thinking its height might be an issue. 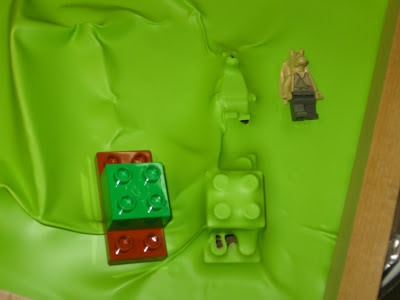 I overheated some of it, melting through the plastic sheet.  Oops.  But you can clearly see the Duplo blocks, and the stupid Jar-Jar in the plastic.  Unfortunately, Jar-Jar made it unscathed.

One thing I wasn't expecting was the odor of the plastic, especially this green plastic seen above. MAN, does it smell horrible.  When you see people mentioning "work in a well ventilated area" they aren't kidding. The plastic continued to have a foul odor for a few hours after it cooled down. I had to drive home from Interlock with my windows down.

Note: This post was originally posted to the Interlock project blog.
Posted by Scott Lawrence at 1:35 PM